In Episode 4 of The Scoop on Mental Health podcast, Michayla meets Chris Biehn, who describes how bipolar disorder has affected his quality of life and how he has found the strength to inspire others as a mental health advocate. In “Finding Hope in a Colorless World,” we hear about the onset of Chris’s mental illness, the benefits of being candid about his struggle, and the campaign he launched to promote mood disorders acceptance. “The most meaningful connections are made when we’re vulnerable,” Chris tell us. “Find people you can be vulnerable with, so you can have those really neat, deep, and meaningful friends.”

“Finding Hope in a Colorless World” [Episode 4] Listen
Chris Biehn relates how living with bipolar disorder inspires him to help others with their own mental health struggles.

For Episode 3 of The Scoop on Mental Health podcast, host Michayla Savitt returns home to hear a very personal story: her own mom’s experience of living with a mental illness for most of her life—but never receiving the right treatment to live life to the fullest. In “I Reached Rock Bottom,” Amy Savitt walks us through the incredibly difficult struggle that finally led her to getting a correct diagnosis and proper treatment. As Amy tells Michayla, “It’s being able to wake up in the morning and look at yourself in the mirror and say, ‘I’m O.K. I’m here for a reason, I’m alive, and I’m gonna make it happen.’”

“I Reached Rock Bottom” [Episode 3] Listen
Amy Savitt recounts her journey to getting the proper help for her mental illness after being misdiagnosed for almost her entire life.

The Sophie Fund recently organized a small conference with a big purpose: to introduce and implement the Zero Suicide Model in Tompkins County. Together with Ithaca’s Suicide Prevention & Crisis Service and the New York State Suicide Prevention Office, we invited the most senior healthcare leaders from local government, medical centers, and college campuses to attend an expert briefing on October 16 at The Statler Hotel.

The presenters were two of the nation’s leading authorities on suicide prevention:

Suicide is absolutely not an inevitable outcome for people struggling with suicide ideation related to mental illness or other factors. The Suicide Prevention Resource Center argues that “we all have a role to play” in preventing suicide.

The American Foundation for Suicide Prevention explains that “suicide most often occurs when stressors exceed current coping abilities of someone suffering from a mental health condition”—and part of the problem is that conditions like depression often go undiagnosed or untreated.

AFSP outlines the risk factors and warning signs for suicide, and the critical steps that suicidal individuals and their families and friends can take when such factors and signs are present. Risk factors include mental health conditions, stressful life events, and a family history of suicide. Warning signs include talking about pain and suicide, increased alcohol or drug use, withdrawing from family and friends, and exhibiting anxiety or loss of interest.

As SPRC puts it: “The programmatic approach of Zero Suicide is based on the realization that suicidal individuals often fall through multiple cracks in a fragmented and sometimes distracted healthcare system, and on the premise that a systematic approach to quality improvement is necessary.”

Certainly, the facts make a compelling case that healthcare settings must play a critical role in preventing suicide. According to Pechenik, a review of New York State data of 3,564 suicides in 2013–2014 identified that 25 percent of the individuals who took their own lives had been discharged from emergency departments or inpatient facilities within just seven days prior to their suicide deaths.

The data also indicates a strong need to better train clinicians in suicide screening, assessment, intervention, and follow-up. Of 1,585 mental health providers surveyed by the NYS Office of Mental Health in 2014, 64 percent reported little or no specialized training in suicide-specific interventions. Moreover, about 33 percent reported that they did not feel they had sufficient training to assist suicidal patients.

Zero Suicide is at the heart of the 2012 National Strategy for Suicide Prevention, released by the U.S. Surgeon General and the National Action Alliance for Suicide Prevention. The NSSP’s Goal 8 is to “promote suicide prevention as a core component of healthcare services.” Goal 9 is to “promote and implement effective clinical and professional practices for assessing and treating those at risk for suicidal behaviors.”

As Pechenik noted, Zero Suicide is also explicitly embraced by the NYS Suicide Prevention Plan 2016–17, entitled 1,700 Too Many. Implementing Zero Suicide in health and behavioral healthcare settings is the first pillar of the suicide prevention strategy outlined in the plan. The second pillar is to “create and strengthen suicide safer communities.”

According to the U.S. Substance Abuse and Mental Health Services Administration, “There is strong evidence that a comprehensive public health approach is effective in reducing suicide rates.”

Hogan pointed out that the Zero Suicide Model builds on breakthroughs such as the Perfect Depression Care Initiative implemented in 2001 by the Henry Ford Health System in Michigan. Its comprehensive approach to mental and behavioral healthcare—incorporating suicide prevention as an explicit goal—demonstrated a 75 percent reduction in the suicide rate among Henry Ford health plan members.

More recently, Hogan highlighted, The Joint Commission issued a Sentinel Event Alert on the imperative of improving suicide prevention in healthcare settings. The Alert is important because the commission is a body that accredits and certifies nearly 21,000 healthcare organizations and programs (including Cayuga Medical Center) across the country—such accreditation and certification is a symbol of quality that reflects an organization’s commitment to meeting certain performance standards.

“The Joint Commission urges all healthcare organizations to develop clinical environment readiness by identifying, developing and integrating comprehensive behavioral health, primary care and community resources to assure continuity of care for individuals at risk for suicide.”

The commission’s focus on suicide prevention in healthcare settings stems from the belief that while being alert to risk factors and warning signs is important, it is not sufficient. There is no typical suicide victim: most people with risk factors don’t attempt suicide, and others without risk factors do. Thus, the Alert stated:

“It’s imperative for healthcare providers in all settings to better detect suicide ideation in patients, and to take appropriate steps for their safety and/or refer these patients to an appropriate provider for screening, risk assessment, and treatment.”

The Alert reported that many communities and healthcare organizations presently do not have adequate suicide prevention resources, leading to the low detection and treatment rate of those at risk. It noted that although most people who die by suicide receive healthcare services in the year prior to their deaths, healthcare providers often do not detect their suicidal thoughts. “Supportive continuity of care for those identified as at risk for suicide is crucial,” the Alert said.

The Joint Commission reported that in 2014 many commission-accredited organizations were actually rated non-compliant with its National Patient Safety Goal 15.01.01 Element of Performance 1: “Conduct a risk assessment that identifies specific patient characteristics and environmental features that may increase or decrease the risk for suicide.”

The commission said its database recorded 1,089 suicides occurring from 2010 to 2014 among patients receiving care, treatment, and services in a staffed, around-the clock care setting or within 72 hours of discharge, including from a hospital’s emergency department. According to the Alert, “The most common root cause documented during this time period was shortcomings in assessment, most commonly psychiatric assessment.”

The Joint Commission said its Sentinel Event Alert aimed “to assist all healthcare organizations providing both inpatient and outpatient care to better identify and treat individuals with suicide ideation.” The Alert listed areas for improvement:

—For all clinicians working with patients with suicide ideation, care transitions are very important. Many patients at risk for suicide do not receive outpatient behavioral treatment in a timely fashion following discharge from emergency departments and inpatient psychiatric settings.

The Sentinel Event Alert noted that suicide is the 10th leading cause of death in the United States, taking “more lives than traffic accidents and more than twice as many as homicides.” In 2011, according to data published by the U.S. Centers for Disease Control, suicide became the second leading cause of death for Americans aged 15-24.

In April 2016, the National Center for Health Statistics reported a 24 percent increase in the suicide rate in the United States from 1999 to 2014. While age-adjusted death rates for heart disease and cancer have dramatically declined in the last two decades thanks to improved detection and treatment strategies, the suicide rate has skyrocketed.

On September 15, 2017, the U.S. National Institute of Mental Health reported that three interventions, which were designed for follow-up of patients identified with suicide risk in hospital emergency departments, save lives and are even more cost effective than usual care. The interventions were sending postcards to patients at risk; calling discharged patients to offer support and encourage follow-up treatment; and connecting patients to suicide-focused cognitive behavioral therapy programs.

“In the face of a gradually rising suicide rate, the need for effective prevention strategies is urgent,” said NIMH Director Joshua Gordon. “These findings of cost-effectiveness add to the impetus for implementing these life-saving approaches. Importantly, they also make a strong case for expanding screening, which would allow us to reaching many more of those at risk with life-saving interventions.” 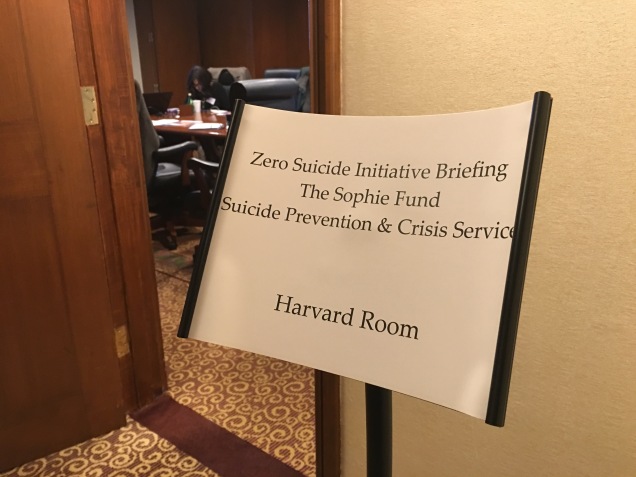 It is the hope of The Sophie Fund that the October 16 briefing at The Statler Hotel is the start of a process of garnering commitments from local healthcare leaders to develop implementation plans that bring the Zero Suicide Model to Tompkins County.

To achieve ultimate success, “buy-ins” will be needed from major healthcare systems including psychiatric units, emergency departments, and college health centers, as well as from primary care providers and substance use disorder treatment centers.

The NYS Office of Mental Health operates the New York Academy for Suicide Safer Care, which offers a 9-12 month program of webinars and coaching calls for organizations seeking to raise their standard of suicide care.

On June 7, 2017, Ithaca Mayor Svante Myrick issued a proclamation supporting The Watershed Declaration and calling for “an all-out effort to prevent suicide.” The Tompkins County Legislature issued a similar proclamation on September 5, 2017.

—By Scott MacLeod and Susan Hack

In the second episode of Michayla Savitt’s podcast The Scoop on Mental Health, we hear the story of Scott Fried, an incredible man who decided to devote his life to volunteer service after being diagnosed with HIV/AIDS three decades ago. “We’re Here for a Reason” tells a remarkable tale of loss, forgiveness, and self-love, culminating in Scott’s mission to help others with self-acceptance and promote safe-sex education. As Scott tells Michayla: “There is inside of each of us an innate worth, an innate sense of goodness and value, that can never, never, ever be unfriended, or undone, or blocked, or just missed, or ghosted, or benched, or ignored.” 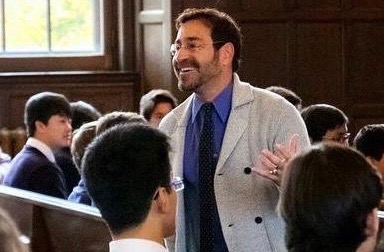 “We’re Here for a Reason” [Episode 2] Listen
Scott Fried explains how getting infected with HIV/AIDS led him to start a life of preaching messages of self-worth and love to people around the world.