It’s here, Wizarding Weekend kicks off on Friday! All you can say is Wow! This is one of the spookiest Halloween festivals out there. For three days, downtown Ithaca is jammed with witches and black cats, owls and dragons, magicians and potion makers, in one great magical community celebration. 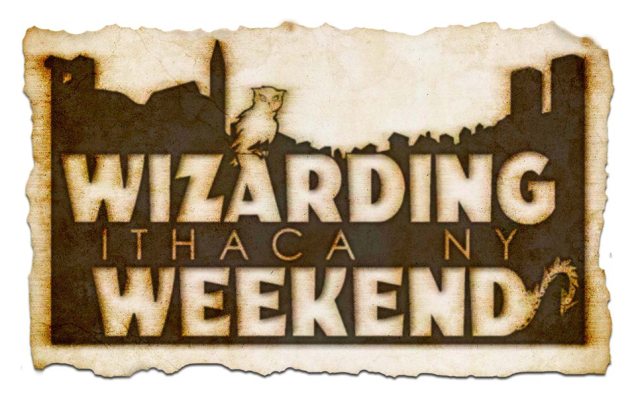 The chance to show off your Halloween get-up starts with the Costume Parade at 3 p.m. Friday from the Greater Ithaca Activities Center (GIAC) up to the Commons. Afterwards, stores in the Commons, Press Bay Alley, along Aurora and Cayuga streets, and inside Dewitt Mall are welcoming trick-or-treaters.

Throughout the weekend, there’s a City of Magic Ball, a myths-and-legends flashlight tour of city streets, a magical artifact scavenger hunt, non-stop entertainment at the Bernie Milton Pavilion, Quidditch matches behind Press Bay Alley, magic classes at the Tompkins Public Library, and much more.

View the program and download a map of the festivities. Click here for a full schedule of events at wizardingweekend.com.

We love the story of how Wizarding Weekend came to be:

When the Whomping Willows that line the Cayuga Lake Inlet were turning gold with autumn, a magical festival was born in Downtown Ithaca. Gabe, an employee at Boxy Bikes and his younger brother (Aiden) hatched the idea to transform Press Bay Alley into Diagon Alley for trick or treating; of course, everyone at Press Bay Alley loved the idea, as it is already a place filled with whimsy and wonder.

What no one knew at that time was how inspiring the idea would be! Within days the event went viral online and thousands of people RSVP’d. This was not going to be a quaint trick or treat for a few dozen kids: families and fans from hours around wanted to come to Ithaca for a magical escape.

Quickly, Darlynne Overbaugh, Bill Overbaugh, Laurence Clarkberg and John Guttridge got to work. They brought Cornell University’s Raptor Club, a Ford Anglia, and myriad vendors, performers and volunteers to downtown Ithaca–all with only days to sculpt a truly magical world, because by this time, national news outlets had picked up the story. More than 8,000 people were planning to attend.

When the big day arrived, no one quite knew what would happen. People arrived in outlandish costumes, their enthusiasm and their love of Harry Potter creating a community instantly. Local business owners rolled with the situation creating interesting products for guests to purchase. The Downtown Ithaca Alliance and volunteers pitched in to help. Wizarding duels, dragons, magic, owls, wizard chess, and wands truly enchanted Press Bay Alley for a day. Visitors received acceptance letters to Hogwarts, found their Houses, traversed the downtown in search of Horcruxes, and teams fought it out in a bicycle-based Quidditch bout. Downtown Ithaca was giddily transformed into a magical world.

In the end, it was the imagination of people who brought out the magic in Ithaca. In 2016, we tapped into this same magical force of nature and 10,000 people attended a full weekend of ticketed events and one day street festival.

Based on the growth and the continued love of all things magic, the Wizarding Weekend Executive Planning Committee has renewed their resolve to  continue this festival for 2017. Instead of focusing on Harry Potter, Wizarding Weekend will celebrate all things magic in a family friendly way every Halloween weekend, until people stop coming or the organizers exhaust themselves.