The Tompkins County Legislature passed a resolution a year ago to support the Zero Suicide Model, calling on local healthcare and behavioral healthcare providers to follow the model’s systematic clinical approach to preventing suicides.

Cayuga Health Partners, a Physician-Hospital Organization comprising more than 40 medical practices and 200 physicians and a leader of healthcare delivery in Tompkins County, pledged to become a “Zero Suicide Champion” with the goal of implementing the suicide prevention model in our local healthcare network.

The Zero Suicide Model involves a foundational belief that suicide deaths for those engaged in the healthcare system are preventable. It is clear that safer suicide care is in the best interest of our patient population. I know for myself and my team, we all want to go to bed at night knowing we’ve done everything in our power to support the well being of the communities we serve.

The case for Zero Suicide is compelling. The New York State Office of Mental Health has released data showing that an overwhelming number of those who die by suicide are often already engaged in health systems. More than 80 percent of people who die by suicide have had health care visits in the prior 12 months—often more recently than that. These findings are consistent with national data.

Making the commitment to become a Zero Suicide Champion was the easy part. Now, utilizing the specific strategies and tools available free of charge to practices and providers nationwide through the Zero Suicide framework, Cayuga Health Partners is working to prevent suicides while improving the care for those who seek help.

Cayuga Health Partners is working in collaboration with Ithaca’s Suicide Prevention and Crisis Service in an effort to encourage individual practices and providers to embrace the Zero Suicide Model. In the fall of 2018, we launched a series of Lunch & Learn events featuring presentations about the model by SPCS Executive Director Lee-Ellen Marvin. To date, more than 60 percent of the primary care practices in the network have opened their doors to the presentations and discussions about the role they can play in suicide prevention. Members of Cayuga Health Partners have also played a role in supporting our partner organization, Cayuga Medical Center, in its own implementation of the Zero Suicide Model.

Cayuga Health Partners (formerly called Cayuga Area Plan/Preferred) is a partnership of the Cayuga Area Physicians Alliance (CAPA) and Cayuga Medical Center. Our network mission is to unify member organizations in the pursuit of high quality, accessible, and cost-effective healthcare for the population of patients we serve. In efforts to accomplish this, Cayuga Health Partners is a physician-led, physician-driven effort combining evidence-based best practices and innovative data collection technology in a way that aligns physician incentives and community partnerships to drive improvement in clinical quality.

For more information about the Zero Suicide Model, go to: http://zerosuicide.sprc.org/ 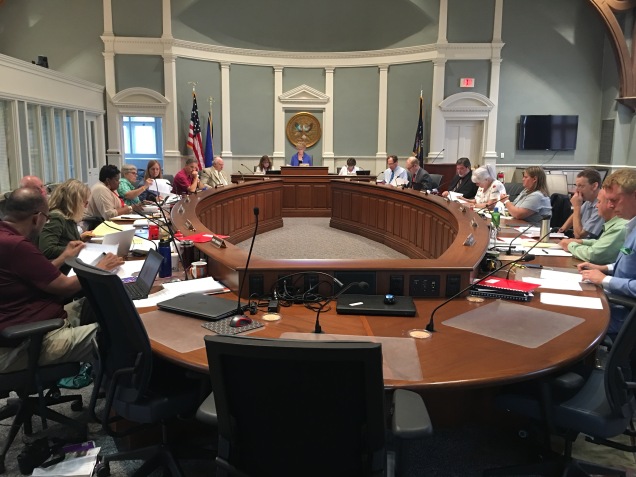 “This is an initiative we can be proud of,” said Shawna Black, chair of the legislature’s Health and Human Services Committee, who sponsored the resolution. “We are going to be one of the first counties in New York State to implement Zero Suicide.”

“We have a lot of work to do as a county to support those that struggle with mental health issues,” Black added. “However, the conversation will continue and our goal of zero suicides will set the standard for our community and it’s providers. As a community we realize the need for honest conversation about suicide prevention and the tools we must implement in order to save lives. I would like to thank the many providers that offer service on a daily basis and for their commitment to the zero suicide initiative.”

“The suicide prevention work done at the community level in Tompkins County over the last two to three years has been extraordinary,” Carruthers said in a statement to The Sophie Fund. “Creating community partnerships, raising awareness, decreasing stigma, forming a coalition, and most recently working to integrate suicide prevention in health and behavior healthcare services—the Zero Suicide Model—it’s a wonderful accomplishment.

“In fact,” Carruthers added, “a big topic of conversation at Governor Andrew Cuomo’s Suicide Prevention Task Force this year has been how to support robust suicide prevention at the local level. No one approach is going to be enough to materially reduce the number of suicides. It takes community-level public health approaches, a commitment to deliver suicide safer healthcare, and the creation a culture of data-informed programming. The partnership between Tompkins County and the state has been truly exemplary in moving in this direction.”

Sharon MacDougall, Tompkins County deputy commissioner of mental health services, said “the support from our community, the Tompkins County Health and Human Services Committee, and the Legislature is inspiring and incredibly meaningful to our behavioral health providers and clients. Tompkins County Mental Health Services is honored to collaborate with our partners to push forward a vision and commitment for Zero Suicide in our community.”

David Shapiro, president and CEO of Family & Children’s Service, commented: “F&CS has for many years been at the forefront of suicide prevention in Tompkins County through the staff training, team support, and clinical supervision that have become hallmarks of our clinical program. F&CS is one of the founding members of the Tompkins County Suicide Prevention Coalition. Along with committing to the Zero Suicide Model, F&CS is also committed to be a Zero Suicide Champion and will share what we learn with the broader community so that we can all be better prepared to help people who may be at risk to commit suicide. Our commitment to the Zero Suicide Model sets a lofty goal with an aspirational challenge.”

Kent Bullis, executive director of Cornell Health, commented to The Sophie Fund: “Cornell Health supports the Zero Suicide model, and is committed to completing the Zero Suicide Organizational Self-Study this summer and reporting out our experience to the Tompkins County Suicide Prevention Coalition in the spring.”

In comments to the Legislature prior to Tuesday’s vote, Scott MacLeod of The Sophie Fund said that “adopting the Zero Suicide Model is an important step in addressing the public health problem of suicide and the rising suicide rate.” The Sophie Fund sponsored The Watershed Declaration adopted exactly 15 months earlier in which local healthcare providers pledged to intensify suicide prevention efforts in Tompkins County. The Sophie Fund also co-hosted an expert briefing on the Zero Suicide Model last October at The Statler Hotel on the Cornell campus.

WHEREAS, the Tompkins County Suicide Prevention Coalition endorses the Zero Suicide model as a framework for organizational commitment to safer suicide care in health and behavioral health care systems, and

WHEREAS, suicides are preventable, now therefore be it

RESOLVED, on recommendation of the Health and Human Services Committee, That Tompkins County hereby signs onto the Zero Suicide model to reduce the number of people committing suicides, commit to sharing lessons learned with other counties to support a state-wide initiative and encourage all health and behavioral healthcare to participate in the Zero Suicide model…

The Zero Suicide Model, sometimes called the “Suicide Safer Care Model,” holds that suicides can be prevented by closing cracks in healthcare systems—that suicide deaths for individuals under care within health and behavioral health systems are preventable.

As the Suicide Prevention Resource Center (SPRC) puts it:

“The programmatic approach of Zero Suicide is based on the realization that suicidal individuals often fall through multiple cracks in a fragmented and sometimes distracted healthcare system, and on the premise that a systematic approach to quality improvement is necessary.”

The facts make a compelling case that healthcare settings must play a critical role in preventing suicide. A review of New York State data of 3,564 suicides in 2013–2014 identified that 25 percent of the individuals who took their own lives had been discharged from emergency departments or inpatient facilities within just seven days prior to their suicide deaths.

The data also indicates a strong need to better train clinicians in suicide screening, assessment, intervention, and follow-up. Of 1,585 mental health providers surveyed by the New York State Office of Mental Health in 2014, 64 percent reported little or no specialized training in suicide-specific interventions. Moreover, about 33 percent reported that they did not feel they had sufficient training to assist suicidal patients.

Zero Suicide is at the heart of the 2012 National Strategy for Suicide Prevention, released by the U.S. Surgeon General and the National Action Alliance for Suicide Prevention. The NSSP’s Goal 8 is to “promote suicide prevention as a core component of healthcare services.” Goal 9 is to “promote and implement effective clinical and professional practices for assessing and treating those at risk for suicidal behaviors.”

Zero Suicide is explicitly embraced by the NYS Suicide Prevention Plan 2016–17, entitled 1,700 Too Many. Implementing Zero Suicide in health and behavioral healthcare settings is the first pillar of the suicide prevention strategy outlined in the plan. The second pillar is to “create and strengthen suicide safer communities.”

The Zero Suicide Model builds on breakthroughs such as the Perfect Depression Care Initiative implemented in 2001 by the Henry Ford Health System in Michigan. Its comprehensive approach to mental and behavioral healthcare—incorporating suicide prevention as an explicit goal—demonstrated a 75 percent reduction in the suicide rate among Henry Ford health plan members.